Doorbells are a necessity! Especially if you want to be alerted to a visitor! Knocking on someone’s door is so last century….but how do you decide whether to go for a wireless doorbell vs. a wired doorbell?

What are the differences? Are there any features you get with one but not with the other?

As you may have guessed, this website surrounds itself with all things wireless doorbell-related! Although you are likely to have guessed my preference, there are some options here where the wired doorbell comes out on top. It goes without saying, a wireless doorbell is going to give you a much better option when it comes to installation.

Not only does it involve less drilling, but you are also left with fewer holes in your door frame, bonus!

Sure, you might choose to screw the wireless push button into your door frame instead of sticking it on with adhesive pads.

But you do not have to get the wire from one side of the door to the other as you would do for a wired doorbell.

Also, heating your house in cold weather can be quite expensive. If you do need to drill a hole for the cable, you need to make sure it is suitably sealed to reduce a cold draft (or even rain) getting in.

Once you have fed the wire through the newly bored hole, you also need to keep it tidy, all the way up to the doorbell chime.

For me, it’s a pain in the proverbial!

Installing a wireless doorbell compared to a wired doorbell is SO much easier and less damaging for your house. This is where the wired doorbell gets the upper hand.

A permanent power supply! No batteries to change.

Having said that, a wireless doorbell chime is usually plugged into a power supply, and the push button uses a meager amount of electricity to function, so changing the batteries only happens rarely.

There are battery-powered chime options out there, but that means more batteries and more chance of going flat without knowing.

With a constant power supply, and no need to change any batteries, there is only one winner.

The wired doorbell edges it, but not by much at all. 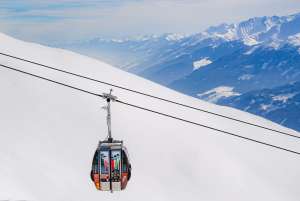 I mentioned earlier in the post that most wireless doorbell chimes are plugged into a power socket.

That allows for a little more portability than a wired doorbell (These need to be in a fixed position), but you can get a wireless doorbell that does not have to be plugged in, like one of these awesome portable doorbell options.

I say almost because we are still limited by distance!

Portability is high on the list of priorities for me, especially the portability that comes with a battery-powered chime, or even better, a WiFi-enabled wireless doorbell!

Having the ability to know you have a visitor from wherever you seem to fit into this age of technology. You can do most things from a phone or tablet, why not speak to someone outside your house! The features of both a wireless doorbell and a wired doorbell are very similar.

Instead of comparing the features, they both have, let’s have a look at some of the options that are very rare with the wired doorbell options:

LED’s are a fantastic product feature if you are hard of hearing or you want to have some peace! Wireless doorbells often have an LED that flashes when the doorbell chime is pressed.

Have a look to see if a wired option comes with LEDs…..it genuinely is a challenge to find them.

Why? Because the wired options are likely to be plugged in near the front door, where you will not be able to see the LED flash.

If you have a wireless doorbell, you can plug it right next to the TV. If you have a visitor, then you will be alerted visually.

Wireless doorbells, like the Ring Video Doorbell 2, link up to your WiFi AND Alexa. In terms of product features, I rate this one highly.

Not only will you be alerted to a visitor if you are at home, but the integrated mobile app (Available for iOS and Android) will also make sure you are alerted when you are out of the house too! It has options to see, hear and speak to your visitor from afar.

Both of these options scream out WIRELESS DOORBELL to me, and that is not just because I am an advocate of them either! Wireless doorbells have one battle it must fight that a wired doorbell doesn’t need to.

That is the interference battle!

The only interference that a wired doorbell is prone to is the interference of someone accidentally cutting the wire! Not a common issue!

Wireless, by design, has to get from the transmitter to the receiver for it to work.

This involves smashing through walls and metal and fighting for supremacy in your house full of wireless signals! The vast majority of the time, it will win.

Too many wireless devices and failure to plan the receiver’s position could mean you are left with intermittent transmission issues.

A wired doorbell signal is sent in a secure cable (Unless you have drilled through it!).

OK – so this website discusses various topics regarding wireless doorbells, so you are likely to know the winner already.

I took on this comparison with a fair mind, though, and looked at both sides to make sure it is a fair fight.

Having said that, there is one clear winner. If I were in the market for a doorbell, I would be going for the wireless option.

It seems that the product features of a wireless doorbell, compared to those of a wired doorbell, are much better and much more current. The features that do not come with a wired doorbell option make my life a little bit easier, such as the LED and the WiFi/Video integration.

Also – wireless doorbells are actually cheaper than their wired counterparts!

There are many options out there too, we have detailed some of the best doorbells for you to look at.

Have we missed anything out? Do you have any questions? Please use the contact us page, or leave a comment below!